Carlos, 13, hunkered in his father’s arms in the club house of Rotary 2030 in Panama City. His voice came out in a guttural cry as Rotarians from foreign clubs gathered around, taking pictures, making friends, and learning about Carlos’ story.

Carlos has cerebral palsy, diagnosed when he was six months old. 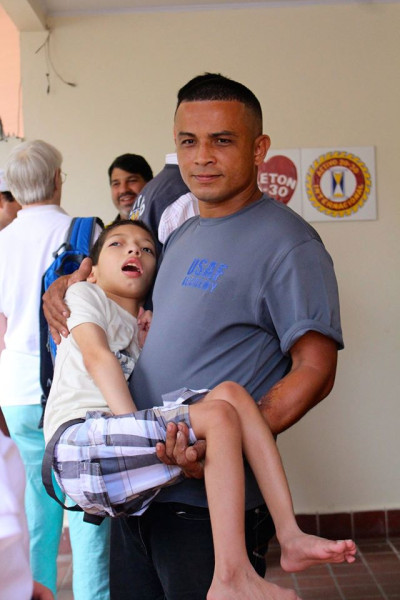 “He was a normal baby and then….” The Panamanian Rotarian struggled to find the words in English to describe what happened to Carlos. It didn’t matter. For over an hour, in blistering heat, Carlos’ father held him in his arms. Carlos’ mother, his sister and brother all gathered around him and then the moment arrived. He was going to be placed in a special wheelchair that so many Rotary clubs in North America worked to provide him with.

“It is… It is scary for him to do this… So many times people think these kids… That they don’t have feelings. They do,” said one of the 20-

30 members as he looked on anxiously. 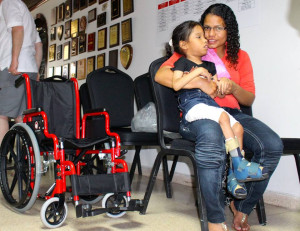 Carlos went outside, held in his father’s arms as Rotarians from Panama, Canada and the United States gathered around. Pictures were taken. Water bottles handed out. Then work began. Deb Hammond of Bar Harbor, Maine and Marilyn Wells of Ellsworth, Maine began to help Carlos’ family fit him to a special wheelchair designed for children with cerebral palsy, meticulously and lovingly easing him into the seat while simultaneously adjusting the wheelchair to fit his body. Carlos withstood all the poking and prodding, the pictures, the adjustments and in the end. he was fitted into the wheelchair. Moments later, Carlos gifted his mother, Rachel, with the most beautiful smile. She pet his hand against her face, over and over again. His smile became bigger. Ariel, Carlos’ father, was no longer carrying Carlos’ weight. Instantly, his daughter catapulted herself into his arms for a hug while his younger son stood by, holding onto the edge of Carlos’ wheelchair, watching over his big brother.

“For these families, this means… it means everything,” said Roy, a Panamanian who is not affiliated with Rotary but who became an integral part of Sunday’s adventure. “All of this… it is so fortunate.”

You can call it good fortune or Rotarian luck or divine province. But Roy was a huge part of it. Roy was Linda Whitehead’s driver when she came to Panama via White Rock, British Columbia. Linda is the Global Wheelchair Program Chair and a past president of the Semiahmoo Rotary Club in Canada. Roy and Linda are both talkers, friendly, ready to pat someone on the arm, take their hand, make a connection. He asked her about why she was in Panama and she told him about the wheelchairs. He told Linda about his wife’s friend Ari and her eight-year-old Gabby. Gabby was diagnosed with Cerebral Palsy when she was a year old. Ari is a 29-year-old single parent who spends most of her days carrying Gabby in her arms. When she works in the restaurant, she brings Gabby with her, placing her on a mat in the room while she makes money to support them.

“You are so strong,” I tell her and make a muscle.

“But not just your muscles. Your heart. It is so strong.” 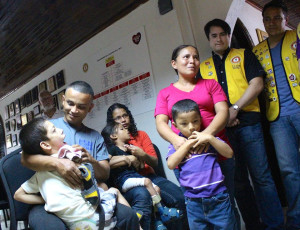 Gabby’s wheelchair came with Linda to Panama not because Linda knew about Gabby. It came because Linda brought an extra wheelchair for carry-on instead of bringing a bag full of make-up or books or clothes.

“You never know when you might need one,” she says off-handedly.

She needed that wheelchair the very next day. That carry-on wheelchair became Gabby’s wheelchair.

It isn’t easy for Ari and Gabby. Though they live only about 45 minutes outside of Panama City, getting Gabby to the rehabilitation center has proved too difficult. Not only does it cost about $5 a day in travel expenses, which is a lot here;
it meant a lot of work for Ari. Getting Gabby to the center required Ari carrying Gabby up a hill down a hill, on a bus, onto another bus. All of this was under Ari’s manpower, all of it required hours of Ari holding Gabby in her arms to take her to a rehabilitation center that sees 300 patients a day. Wheelchairs sponsored by Rotarians from around the world, wait in the halls for patients. Now Gabby will have one of her own.

“It makes things easier,” Ari says. “I am so thankful.” 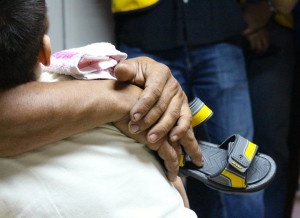 Rotary Club members from Seattle, Canada, Alaska, Maine and Panama were there to watch Gabby settle into her first wheelchair, watch Ari smooth away the hair from Gabby’s face and then kiss her hand over and over again. We were there, lucky beyond words to watch the love that Ari envelopes Gabby with, to witness the love that Carlos’ family showers on him and each other. We are the thankful ones.

Members from the Bar Harbor and Ellsworth Maine Rotary Clubs will be visiting Santiago, Panama this week and distributing wheelchairs that they are providing to residents in need. The Santiago Rotary Club is graciously hosting us and helping with the project. I’ll be posting more, hopefully, as the week progresses. Please forgive me for the typos. I’ll try to fix them later. ‪#‎rotary‬ ‪#‎rotaryinternational‬ 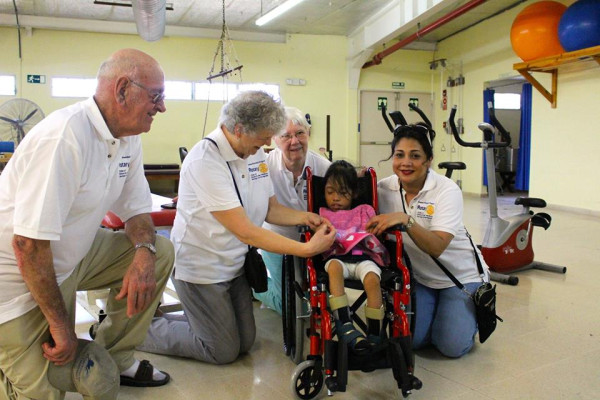