So for Halloween, I was Fern from Charlotte's Web, because:
1. I didn't want to be sexy anything.
2. I was not feeling creative.
3. I really want a mini pig and if I was Fern, then I could buy a stuffed pig, which could be Wilbur. Obviously, a stuffed pig is not as cool as a real mini pig, but I am a person who is willing to compromise. 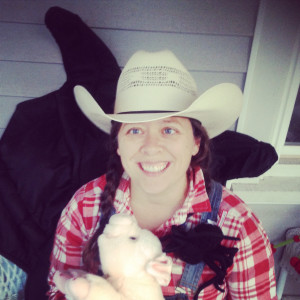 Here I am as Fern, looking totally dorky.

Anyways, this Monday as I was packing up all the Halloween stuff, I left Wilbur on the kitchen table. Gabby the dog found him, took him off the table and carried him into the living room.

The pig was slobbered on but intact.

I put him up on the piano. I thought, "This pig is going to be safe up here. I bet I can clean him. He'll be okay."

Gabby came in the living room, saw Wilbur out of her reach. She stared at the piano. She began to whimper.

She never whimpers for toys.

I said, "Gabby? Seriously?"
She began to howl.

I said, "Gabby, do you honestly love that pig so much?"

She continued to howl. If you have ever heard Gabby howl, you will realize this is a powerful, pitiful thing that has magical aspects to it similar to babies crying. It can not be ignored. It tears your heart in half.

She carries him everywhere. She takes him to her food dish with her. She cuddles with him on the couch and she has brought him to bed. She won't let the other dogs go near him. He is some pig. 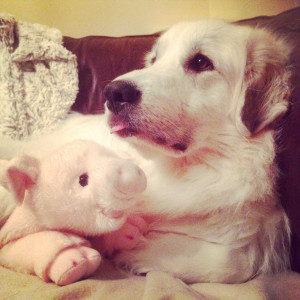 Gabby and Wilbur on the couch. 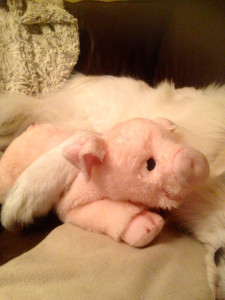 A close-up of her paw over Wilbur's back. I swear I did not set these shots up. This is how she loves him. 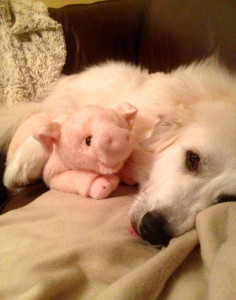